Elle Henig calls herself an “activity collector.” The 26-year-old Clevelander works at The Cleveland Orchestra administrative offices, and her pastimes include archery, rock climbing, fencing, and now, horseback riding.
“I had only been on a horse three times in my life for trail rides and loved it. This summer I decided to try riding lessons. So many people offered advice on places to ride, and even loaned me equipment to wear. Chagrin Valley Farms was highly recommended and when I inquired, Sue called me right back. I expected to have to put down a chunk of change, but when she told me about the beginner package for $125, I thought it was fine…Even cheaper than a car payment.” 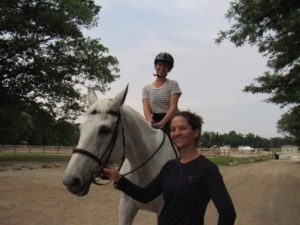 Elle aboard Tori with instructor Sonja
Chagrin Valley Farms was only a 30-minute drive from Elle’s home. “I wasn’t nervous during the first introductory ride with my instructor, Sonja. She stressed safety first and introduced me to my horse, Duke. He was very gentle and comfortable once I was in the saddle. I even got to trot during that first lesson. I was hooked,” she recalled.
During her first four lessons, she practiced trotting on a long line connected to Sonja so the instructor could monitor her control. She rode Duke for three lessons, then tried a new horse, Tori. “She was much bigger and felt very different after Duke. With Tori I worked harder and felt like I was using more muscles. Now I am posting at the trot without a lunge line, and I feel I have accomplished so much. I would like to keep going and eventually learn to jump!”
“I’m at that time in life where I wondered if I could do something new. I’m not very athletic and all the sports I do are inwardly-focused and peaceful to me. When you are in front of a target and doing something wrong you know it, and if it’s right that is an incredible feeling. The horse is very intuitive and feels it if I am doing something wrong,” she explained.
Riding on the lunge line (below)